The CARSIC HOUSE in Repen is a very well preserved example of the characteristic and spontaneous Carsic architecture, which, within an enclosed courtyard borjac combines the living areas and the agricultural buildings. The main architectural of the buildings are: the stone ROOF covered by stone TILES; the big CHIMNEY; the walkaround BALCONY; the STONE FRAMES of the doors; the WINDOWS framed by stone and enclosed by grilles; the WALL which protects the courtyard from the bora ( Trieste's strong wind ); the STONE PORTAL kaluna with a wooden door at the entrance in the house courtyard. The house, with its agricultural buildings and the borjac cannot be precisely dated, but very probably dates back to the end of the XVIII century. Its present appearance is that of 1831, when the last additions were made and it was renovated. Subsequent building work was exclusively aimed at its conservation. Due to its humble purpose, the farmhouse maintains the true appearance of the ancient houses typical of the Carst, charactrised especially by the use of stone as a building material and for ornamental purpose.

The LIVING QUARTERS include the KITCHEN - hisa on the ground floor and, on the upper floor, the BEDROOM and the LOFT na podu, where often the older members of the family or the children used to sleep, although the use of this room was twofold: in fact, agricultural produce, such as wheat, barley, potatoes and walnuts was also kept in it. The kitchen is paved with a chiseled stone floor, a large part of it being occupied by the raised hearth, which is open, typical of the Mediterranean style, overhung by the hood napa, with its characteristic wooden shelving and decorative curtain around the hood tornakamin.

Next to the hearth we also find the wooden fire. The Carsic kitchen has two characteristic niches, one next to the window and another in the wall - skafenca with a shelf for vased and a water container. The crockery and the utensils on display are all original. The same is true for the interiors of all the rooms, such as the bedroom, where next to the small double bed - za poldrugo persono we find the typical cot and, next to the wall, there is the Carsic bottom drawer. The sheets on the bad are made of local material, the blankets are made with hand-made yarn. On the bad we can see the characteristic mattress of maize husks Iubenca. In the FARM BUILDINGS ( the CELLAR - hram / the STABLES - stala / the LOFT - na podu ), the visitor will see the activities of the Carst inhabitants of the past which enabled them to survive; the tools and objects on display represent a cross-section of some of the more frequent occupations: VITICULTURE, ANIMAL HUSBANDRY, AGRICULTURE. The old BARN - na stali located above the stable is nowadays used as a space for temporary exhibitions. In the courtyard ther is also the SHED - skedenj, in which the paesant trimmed and sorted his produce collected from the fields. The carriage and several other agricultural implements were also kept in the shed. 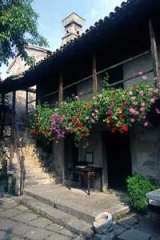